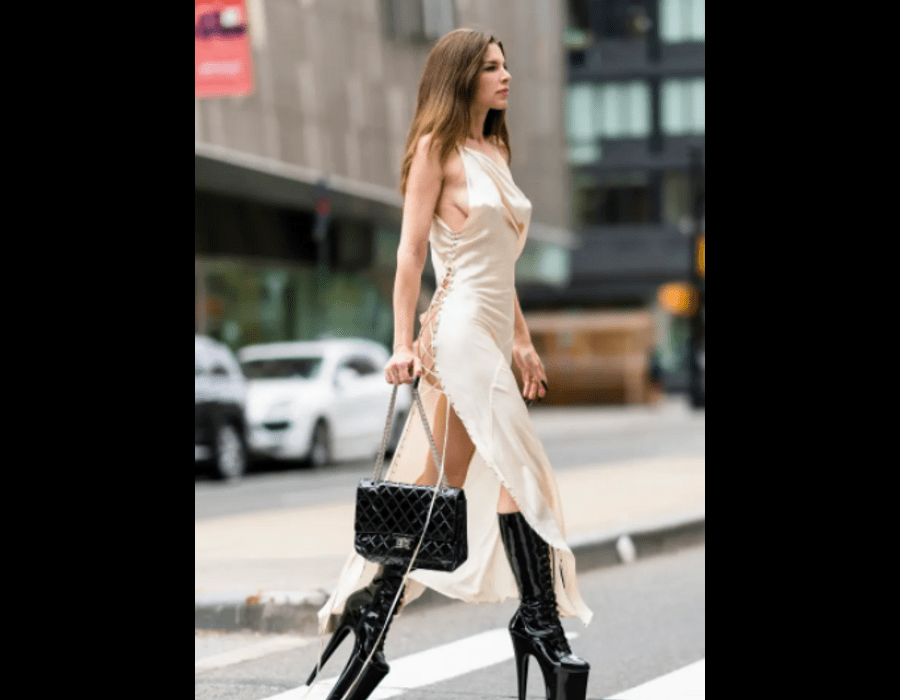 Julia Fox walks on 25-centimeter heels in a skimpy slip dress. JULIA FOX doesn’t seem to be afraid of heights. At least she is afraid of falling from 25-centimeter heels. The Uncut Gems actress was walking the lanes of New York the other day wearing tall black patent leather boots with an unrealistically high platform and even higher heels. This daring shoe, which would be the envy of the outrageous queen Lady Gaga, Fox combined with a beige satin dress and a black Chanel bag.

The dress also deserves special attention. It was a silk slip that draped casually around Julia’s slender figure. On one side, the outfit was laced up with a long ribbon, exposing the appetizing curves of Kanye West’s ex-girlfriend. Apparently, Fox decided not to wear lingerie with this dress, achieving an even more wow effect. We only worry about whether she tripped over long strings that dangled freely and even dragged along the ground. Falling heels from that high could cause something far more serious than scratches on your knees.

This is not the first time a celebrity has been snapped downtown in sexy costumes. The previous month, Fox WORE A white crop top and micro-skirt set, which was created from a single men’s tank top that Julia boldly ripped open. She even graciously shared a tutorial on social media on how to do the ” super simple awesome pretty ” look. She also redesigned a couple of jeans, making them ultra-low waist by cutting off the band. The enterprising needlewoman used the rest of the outfit as a top.

By the way, there was information that Fox could evolve into a reality TV star in the near lot. Journalists assure that she is preparing for the filming of the next season of the show “Real Housewives of New York.