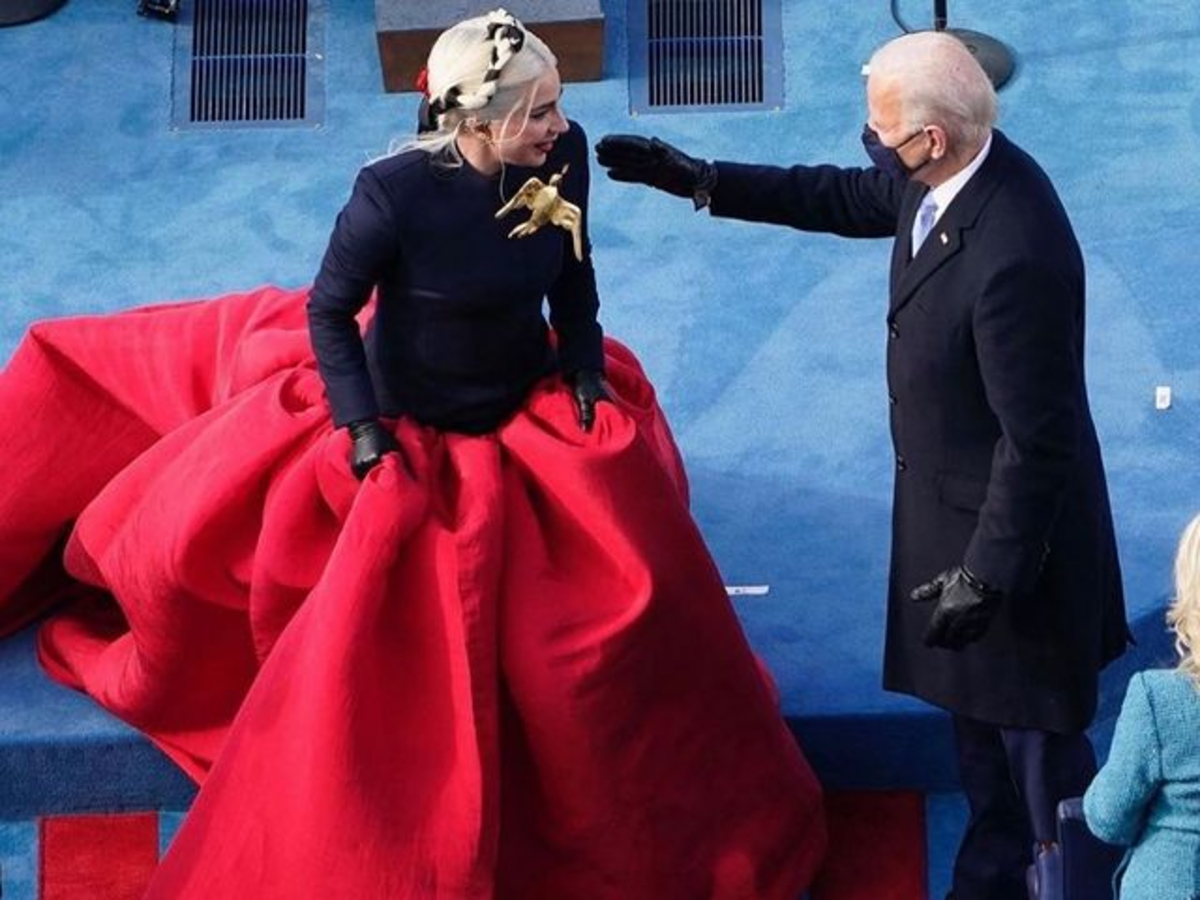 In the Hunger Games, Katniss Everdeen wore a Mockingjay pin as a symbol of the revolutionary movement she would lead in defiance of the corrupt government powers-that-be. For President Joe Biden’s and Vice President’s Kamala Harris’ inauguration, Lady Gaga wore an enormous, gold dove with an olive branch in its mouth as a symbol of peace and unity. Lady Gaga sang the National Anthem at the swearing-in ceremony and it was more than the pin that had people comparing her to the Hunger Games.

Lady Gaga wore an amazing silk dress from Schiaparelli with a navy blue, long-sleeve bodice and a flowing, red, skirt that featured a stunning train. The outfit looked as if were designed for royalty and The outfit was perfect for the pop star who is known for wearing elaborate costumes.

Lady Gaga descended down the walkway and made her way to the podium where she was presented with a sparkling gold microphone. She sounded amazing and fans immediately flocked to social media to make their Hunger Games comparisons.

Speaking about the pin that she wore, Lady gaga stated the following.

A dove carrying an olive branch. May we all make peace with each other.

Schiaparelli also made the pin to  You may see a close-up of the dove pin that Lady Gaga wore on her custom dress below.

A dove carrying an olive branch. May we all make peace with each other. pic.twitter.com/NGbgKM9XiC

Here is the full video of Lady Gaga’s performance at the inauguration of President Joe Biden.

The Presidential inauguration was scaled back and under heavy security due to the attack on the nation’s Capitol by Donald Trump’s supporters two weeks ago. Donald Trump ran the narrative that the election had been stolen from him and convinced his followers that Joe Biden wasn’t the rightful winner of the election.

Donald Trump chose not to attend the inauguration but former Vice President Mike Pence made sure he was there representing the transfer of power, as is customary for elections in the United States.

What do you think about Lady Gaga’s inaugural outfit? Do you like her custom Schiaparelli dress and the matching dove pin? Do you think Lady Gaga was serving Hunger Games’ vibes?