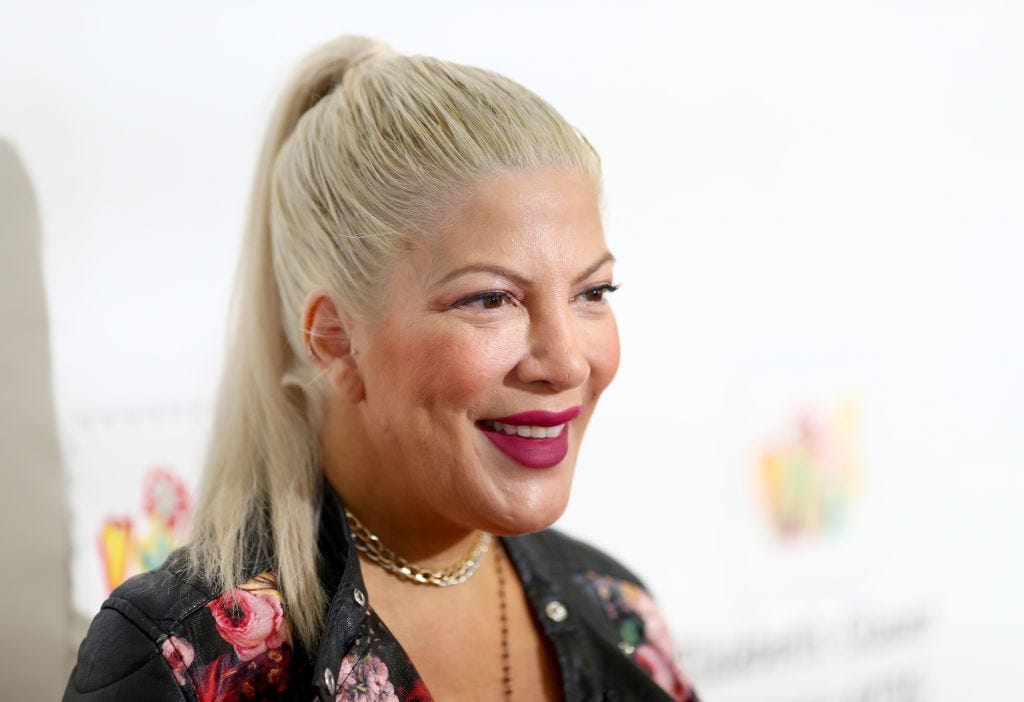 The Real Housewives of Beverly Hills are down two cast members. Rumors are swirling about who will be replacing Denise Richards and Teddi Mellencamp.

Tori Spelling is pretty much who you think of when you think of Beverly Hills royalty. For years, her name has been floating around for potential people to join the cast.

She commented on the rumors in 2018 saying that she loves the show but has not been asked to do it.

Kathy Hilton is one other name that has been all but cemented for someone joining as a ‘friend of.’ The hotel royalty just so happens to have a feud with Tori’s mom who CELEB reported will appear with her daughter.

‘Tori Spelling is doing [RHOBH] with her mom, Candy Spelling. People who have followed Tori know her relationship with her mom has been contentious for many years. Kathy Hilton – Kyle Richards‘ and [Kim Richards]‘ sister- is also expected to join, and she has some issues with Candy as well,’ the publication reported.

When Reality Blurb reported on the news — Bravo fan opinions were split.

‘For some reason, I don’t hate this idea. Tori is certainly always steeped in drama and we know she isn’t afraid to put it out there. The real mystery here is why Erika keeps getting a diamond. She’s even more boring than Melatonincamp was and that’s saying something,’ an optimistic fan said.

My Dad always said “ Your eyes are the windows to your soul”… – I’ve never forgotten that. Because of that belief my Dad rarely let his actors wear sunglasses in a scene. He believed their eyes conveyed everything. All emotions. – I’ve carried that motto thru my life. I always look people in the eyes. I hold their gaze always. I never look away. I’ve taught my kids to always show people respect and look them in the eyes when they are talking to them. – I used to hate my eyes. When I started 90210 at 16 I was filled with low self confidence. Then, internet trolls ( yep we had them back then too!)called me frog and bug eyed. Being put under a microscope as a young girl in her formative years was hard. I spent years begging makeup artists on my shows and movies to please try to make my eyes look smaller. I would cry over my looks in the makeup trailer chair. – I didn’t start to realize what an asset my eyes were till I did Scream 2 and the cover of Rolling Stone reenacting the iconic shower scene from Psycho. My eyes made that photo. They showed the emotion I was “feeling in my soul” in that picture. – Now, my face. Many people ask why I only show one side of my face. Some write hurtful things. Yes, it is a choice. My choice. Because, a vulnerable innocent excited girl showed all of her face at 16 and was eaten alive. Choices about my looks were made for me by nameless and faceless accounts. Words can’t be unread. Cyber bullying existed then and it does now worse than ever. So, every time one of you ask me why I don’t look straight on in photos and videos know why I make that choice. Years of hurtful comments that I don’t even want to share to give them energy. Way worse than bug or frog eyes. Just remember next time that you go to comment on someone’s account regarding their face or body or choices, you don’t know them. They don’t know you. But, their soul will remember that unkind comment. It’ll be imprinted on them. Our memories can’t remember physical pain but we do remember emotional, verbal, and written pain. – That said. Here’s me. Straight on. I love my eyes now. They make me uniquely me. And, I rarely wear sunglasses. (Scroll 2see Rolling Stone cover)

‘I’m with you Faye! I have no affinity for Tori, Candy or Kathy Hilton. However, their inclusion will ultimately diminish Kryle’s & the rest of the obnoxious (GRinna) or boring (EJayJay, Dreet) heap,’ agreed another commentator.

However, some are not enthused by the idea.

‘Scraping the bottom of the barrel has been perfected at Bravo,’ one said.

‘I would rather watch paint dry,’ another wrote.

Do you think Tori Spelling should join?