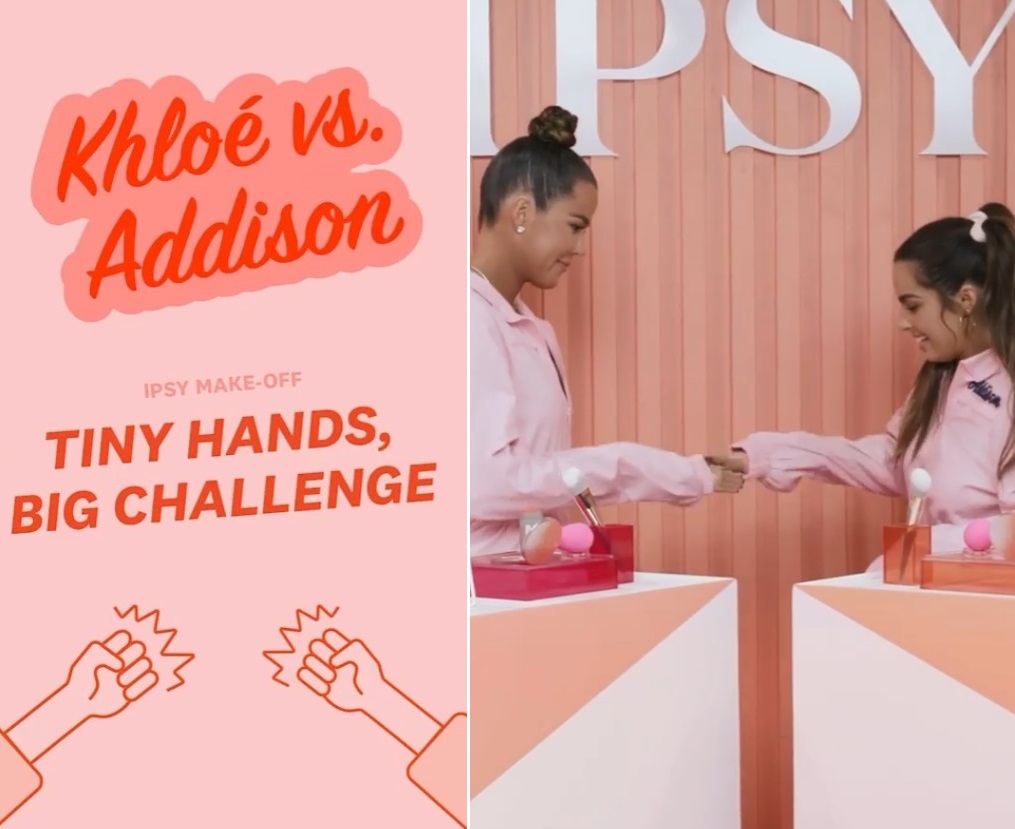 When was the last time you had a good laugh at something Khloe Kardashian posted on social media? Let’s make it today! On Friday, the KUWTK star Khloe Kardashian and TikTok star Addison Rae showed up on IPSY’s Instagram and had a lot of fun while trying to complete a hilarious challenge.

Addison Rae has recently became a brand partner with IPSY, which is why she probably invited Khloe for some fun. And we have to see that these two friends really made our day with their “Tiny Hands Make-Off” competition.

Yes, that is right, the stars put on tiny hands and had to go through five station and complete a full makeup process. Who nailed it? Let’s see them in the video below.

“The tinier the hands, the bigger the moves,” teased IPSY earlier on Friday. Then, we got to see the full video and we have to admit this was too fun not to laugh out loud!

The tinier the hands, the bigger the moves.🕺 Watch it all unfold TONIGHT at 9 p.m. ET on IPSY IGTV. And don’t forget to vote for your chance to win! #IPSY #IPSYMakeOffs @addisonraee

Before the countdown started, Khloe and Addison had a small conversation, including Khloe jokingly call Addison a “sister stealer.” That is because the TikTok star has become BFFs with Kourtney Kardashian this summer.

“Sorry that you didn’t get Kourt’s invite to Palm Springs,” replied Addison, who also gets to participate in Kourt’s morning workout sessions. “This girl here thinks she’s the newest Kardashian. But I’m here to show her how it’s done,” replied Khloe.

So, with tiny hands in place, the two stars try their best to get smoky eyes, and even fake eyelashes. Do they nail it? Not even close, but this is what makes the competition so fun.

🥊 Let’s get ready to fumbleeeee! 🥊 Watch @khloekardashian and @addisonraee take their tiny hands to the face in this makeup melee. Then vote for your winner below (with #TeamKoko or #TeamAddison) and you’ll be entered to win (rules down there 👇) a year-long IPSY membership, an @itembeauty haul, and a $500 gift card to @goodamerican. #IPSY #IPSYMakeOffs 1. Follow @IPSY, @ItemBeauty, & @GoodAmerican on Instagram 2. Like this video 3. Comment if you’re #TeamAddison or #TeamKoKo below Deadline to enter is 9/30/20 at 11:59 p.m. PST and the winner will be announced by 10/9/20. ⁠To enter this giveaway, you must be 18 years old or older and a resident of the U.S. or Canada (excluding the Province of Quebec). By posting your comment with these hashtags, you agree to be bound by the terms of the Official Giveaway Rules at www.ipsy.com/contest-terms. This giveaway is in no way sponsored, endorsed or administered by, or associated with, Instagram.

“Clearly I won…I mean if this isn’t gorgeous then I don’t know what is,” said Khloe at the end of the video. What do you guys think?

Recently, Addison has been around the Kardashians, aside from chilling in the pool with Kourtney. Addison also starred in Kim’s SKIMS one-year anniversary campaign. Well, at least she had a fun summer, all things considered.