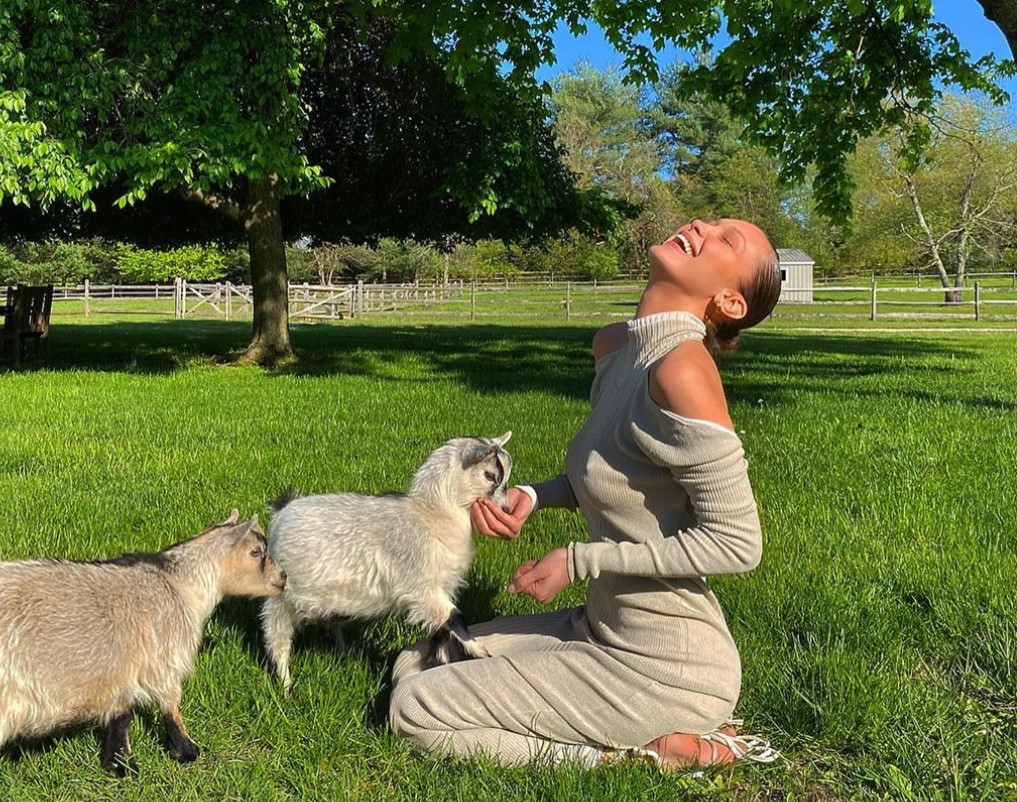 If there is someone that can make living on the farm so fashionable, then it has to be Bella Hadid. It did not matter her dress was worth $2,890 when it came to cuddling two adorable little goats.

The 23-year old model has been social distancing at her mom’s farm and the photos she snapped there are heavenly. She really knows how to turn every photo in a front-page cover, and we definitely like the last photo of her slide she had posted on Instagram.

Surrounded by the fresh green grass and under a bright blue sky, Bella had the time of her life on this farm. You can tell how much fun she has around these cute baby goats too.

Gigi Hadid snapped some of these photos for the i-D Magazine feature, and she wore a $2,890 Bottega Veneta dress while she posed with the two goats. The cute goats are called Funky and Bam-Bam, and they belong to her brother Anwar Hadid and to his girlfriend Dua Lipa.

funky and bam-bam’s auntie. thank you to their lovely parents ~ @sbdanwar @dualipa ~ for allowing them to take place in such a huge production. they were absolutely charming / great work ethic. @gigihadid Shot a @bottegaveneta story of me back in May , for @i_d .. These are a few outtakes.. Extra special thank you to @sarrjamois for the best remote styling , @alastairmckimm for letting us wing it and my very very special Sister for making me feel beautiful. I love you lottt

“Funky and bam-bam’s auntie,” Bella wrote in the photo description, “thank you to their lovely parents … for allowing them to take place in such a huge production. They were absolutely charming / great work ethic.”

Gigi commented on the photo “Muse lyfe. Loving u,” while Anwar wrote, “No way,” and “so fire.” Of course, Lipa had to add “Bella n the tinieeeeeeees,” because who can resist to so much cuteness anyway?

These past five months have been filled with a lot of country-chic photoshoots from Bella, who also did a digital cover shoot for the August issue of Elle magazine. The model was a busy bee, appearing in an ad campaign for Jacquemus and in a photoshoot on ZOOM with Nick Knight for British Vogue.

Well, at least Bella is resourceful when it comes to getting the best props at a farm. So far, she has been doing a great job.