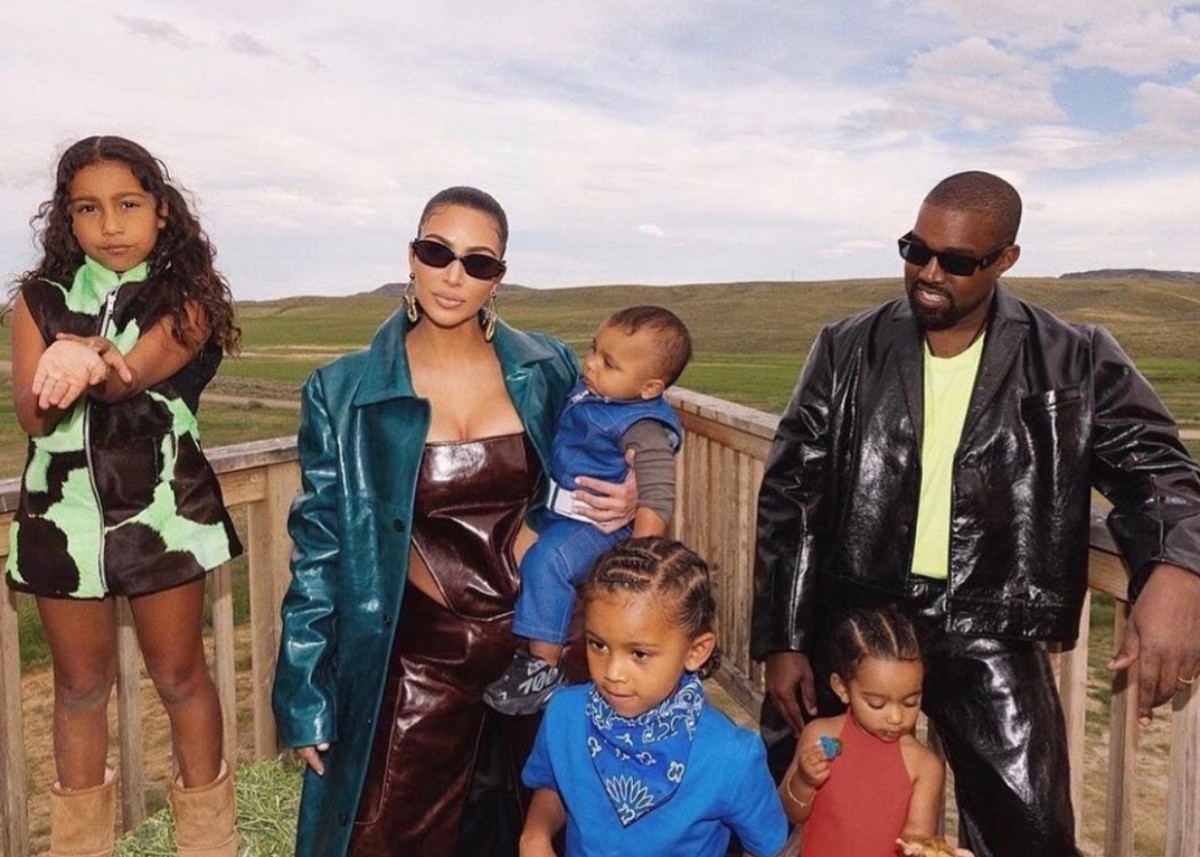 Kim Kardashian’s photographer Pierre Snaps is with the family in Wyoming and sharing some incredible photos of the family as they spend time on Kanye West’s $14 million ranch. The family headed to Wyoming for North West’s seventh birthday that she celebrated on June 15, 2020. It also seems that Kourtney Kardashian has been in Wyoming with baby daddy Scott Disick and the couple’s three children. Pierre shared photos on his official Instagram account and one photo, in particular, is getting plenty of attention. The photo isn’t included on Kim Kardashian’s official Instagram account with her other recent photos. In the photo, Kim and Kanye are surrounded by their four children: North (7), Saint (4), Chicago (2), and Psalm (1).

Kanye West cuts a striking figure in the snap as he is dressed in black leather-type material paired with a yellow tee-shirt and is smiling at his family. Both Kim and Kanye are wearing sunglasses and look like modern and very fashionable ranchers.

North West looked more like a pre-teenager than a child who just turned seven-years-old as she wore a cow print mini dress in brown and mint green with a pair of suede cowgirl boots. Kim Kardashian wore a jumpsuit by Mowalola who has just accepted a position on Kanye’s new Yeezy x Gap label that she paired with a teal-colored coat. The mother of four looked stunning.

Kim Kardashian held her youngest child with Kanye West on her hip and Psalm looked cute bundled up in a denim jumpsuit with a beige shirt underneath. Saint was dressed for the ranch with a blue tee-shirt and matching blue bandana. Both Saint and Chicago wore their hair in braids.

You may see the family photo of Kim Kardashian, Kanye West, and the children below.

Though Kanye West and Kim Kardashian have been dogged by divorce rumors, he was clearly wearing his wedding ring in the new photos.

Here is another photo from Pierre’s recent shoot of Kim and Kanye cuddling up and spending some quality time together.

What do you think about Pierre’s latest photos of Kim Kardashian, Kanye West, and the kids?